Easter is a time when we reflect and celebrate Christ's resurrection from the grave. Nobody understands the resurrection concept better than a Michigan treasure hunter. Locked away in the frozen north for months with barely a glimpse of sunlight, one can truly begin to feel entombed! One way we get through the frozen dark months is with each other. The fellowship we can find at the club meetings is an example.

With Easter comes longer days. The coveted appearance of sunshine is more frequent. We see new life springing forth in all of creation and even we northern treasure hunters feel a sense of new birth. There becomes an urgency to get out there and dig up the past! We feel a need to 'time travel' to the springtimes of the last century. We seek that special link to times long ago.

Perhaps our connection to the past will be a button, one pulled loose from a soldier's uniform as he is welcomed home by his excited family in 1865. Or maybe it will be an unusual chain, like the one I found many springs ago. That chain was made in a special way to be pulled behind a horse-drawn planter to cover the precious seeds of the spring planting.

Years ago, I was detecting in the Allegan Forest at a site known as the Berry Ranch. There is a site in the Western U.P., near where my wife grew up, that has a similar story. That one was known as the Triangle Ranch. Both of those ranches were intended to be fully self-sufficient cattle ranches. I have had the privilege of hunting at each of these sites.

My father-in-law took me to the Triangle Ranch and showed me around the impressive remains.

Judson Rosebush, an Appleton, Wisconsin paper maker, purchased the 9,500 acres. The timber industry had clear cut much of the land, which was then put up in corn, wheat and hay fields.

Mr. Rosebush hired an experienced Colorado cattle ranch boss to run the enterprise and his aim was: "To test out exhaustively the practicability of large-scale, capitalistic manufacturing methods in agriculture."

The end product was to sell a pedigreed Hereford cattle to the ever growing markets in Chicago, Milwaukee, Detroit and Toledo. The beef would be shipped by rail and steamship.

In the 1920's, five enormous barns were built, plus pens, corrals, and houses, including a quite impressive manager's bungalow. The problem was, you guessed it, those cold, six-month long U.P. winters! The ranch simply could not produce enough fodder to feed the cattle all winter.

They tried other things at the Triangle. In 1927, it was advertised as the only Dude Ranch east of the Mississippi. I have walked and detected around the old ranch thinking, "What a great area for horse riding!" Of course, you would want a horse that was not spooked by bears and wolves!

During the Dude Ranch days, besides the horses kept for the guests, they raised sheep and poultry. They also attempted "fur farming" by fencing in wild muskrats and beaver. None of enterprises worked. Eventually most of the land was sold to Kimberly-Clark and reforested for pulp production.

As I recall, there was one building still standing and that was the main ranch house, which is still occupied. The best way to get some idea of how huge this operation was, is to look at the main barn foundations. They are a slab of concrete long enough to land a small plane on!

The Berry Ranch, located in the Allegan Forest, was not as massive and it failed for other reasons. One reason cited for its failure was the Great Depression. The ground is about as bad as it gets when it comes to farming-- it is all blow sand! But the owners really tried to make a go of it. They had a huge garage for their trucks and tractors, and they even had their own private gas station. Here again, the only thing that marks its location is the stone and concrete remains. On the Berry Ranch, there is a large stone silo that stands in the middle of the massive complex, near the fuel station. I have long wondered if that wasn't a water tank to fill the steam-powered tractors?

I was working around an old fieldstone house foundation that was located across the lane from the fuel station. I found several early wheat pennies, and in the sandy soil, they came out really clean. When I worked my way around to the side of the house, I glanced back into what would have been the back yard. There I spotted a perfectly straight row of huge white pines.

My thinking shifted from coin hunting to cache hunting! Having heard that fence lines and tree lines are good landmarks when hiding stuff, I thought I would work along and around these trees. It didn't take long for me to get a good, strong signal

I had to dig pretty deeply, and the deeper I went, the more excited I got! I saw the lid on a canning jar, just what you would hope to see! Of course, as it is so many times, it was just the lid. That was back before I had developed an interest in antique bottles and, as I write this, I am wondering if this could have been the top of a privy or trash pit?

Hunting along, I found another loud, strong target. Once again the hole was very deep by the time I felt something solid. That is when I saw a large ring of steel that I grabbed and tried to lift, but it wouldn't budge. In my mind, I pictured a metal canister with the steel ring as its handle. After digging deeper, I discovered my steel ring was hooked to two long chains. My father was a farm boy and he was able to tell me that the chain was pulled behind a horse-drawn planter.

I cannot count how many times I got my hopes up, only to have them dashed. Well, you don't want to give up! A couple of my bottle-digging buddies found a very old privy. They had already dug two or three pits that day, so they were getting tired. This last pit seemed to be empty. Instead of digging the last foot of the pit out, one of the guys gently probed the soil and felt nothing. He climbed out of the hole and started to fill it in.

My other friend who was more experienced could not believe his eyes!

"Hey, it's your turn in the pit, but if you are not going to finish it, I will!"

"There is nothing there. I probed every inch."

My more-experienced friend has been known to say, "If you don't feel a bottle because you missed it by ten feet or ten- thousandth of an inch, the feeling is the same."

It didn't take him much more than 15 minutes to finish the job and, even though the bottle he found hidden down in the corner, was the only bottle to come out of that pit, it was a rare-colored flask worth $1,500.00 at that time!

I have some customers who are brothers who live near Six Lakes, Michigan. They hunt with another friend of mine, who lives in Shepherd, Michigan, named Steed Anderson. Steed has the treasure hunting bug, and he has it bad! He detects every spare minute he can. He doesn't walk to his car, he detects to his car.

Recently, Steed and his wife purchased an old farm house and I am sure Steed's wife had plenty of things for Steed to take care of around the old place. And I would bet that metal detecting was not on that honey-do list One day, when his wife had to work, Steed decided to sneak in some detecting. He figured he would start with the back yard, so when he saw the wife's car driving down the street, he could sneak in the back door and continue working on his project.

The first items that Steed found were keepers for sure. One was a Michigan, 'good for 5¢' trade token and a tiny, very detailed, toy lead rifle. Encouraged to press on, Steed got a very strong signal right at the base of a big tree. He had dug very deeply, he was still getting a signal and it was coming from the hole. Yes, it was still down there.

Probing with his digger, he finally hit something solid and it didn't feel like a tree root. Digging faster, he finally saw that zinc jar lid that we have all cursed at one time or another. The lid was screwed onto the jar and, when Steed pulled it from the hole, he saw another slide into its place!

After wiping the dirt from the two jars, Steed sat speechless. The first thing he did was call his hunting buddies, the Collins' brothers, and they hurried over. By the time Steed's wife got home, the three treasure hunters had sorted through the coins and counted them. When she walked into the dining room, Phil Collins spoke up and said, "Look what Steed just found."

She was hard to convince! She felt sure these guys were pulling her leg, but they were not! 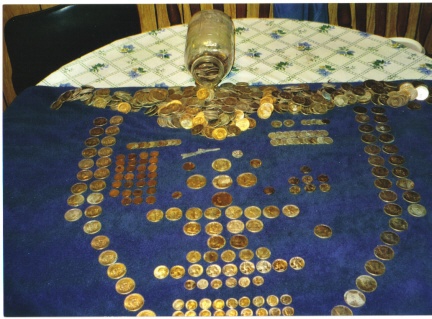