On our vacation this year, there was very little opportunity to treasure hunt because of cold, rainy weather. Even many of the Fourth of July events in the tiny town of Amasa were called off. I did, however, get a chance to do some site seeing. My father-in-law, Bob, has a beautiful log cabin that he built himself on the northern banks of the beautiful Michigamme Reservoir. This man- made lake covers 7000 acres and is covering some ghost towns and lakes.

Besides the log cabin in this beautiful wilderness, the family has a nice pontoon boat, which was difficult to launch at the closest public access point, so our job was to find a better, more-open boat launch, which took us on our trip around this huge lake.

At one point, we crossed over the Michigamme River, where Bob pointed out to me one of Michigan's most sacred ghost towns, Mansfield.

During the twenty-some years of its existence, Mansfield never had a population of more than four hundred, even counting the dogs and cats. It has, nevertheless, one tragic claim to distinction. Mansfield was the scene of one of Michigan's worst mining disasters. It happened on the night of September 28, 1893.

In 1889, a W.S. Calhoune discovered iron ore in profitable quantities there, and platted the town. A year later, the Chicago and Northwestern Railroad built a branch line from the Armenia Mine (near Crystal Falls) to the site. Then the Mansfield Mining Company began developing the mine. The miners and their families represented many ethnic backrounds: Cornish, Italian, Scandinavian, Finnish, and Irish.

The town soon acquired several boardinghouses, two general stores, three saloons, a church and a school. There was a stage line from Mansfield to Crystal Falls and on July 23, 1891, Mansfield received her first Postmaster. .

By 1893, the mine had six side shafts at different levels, with the deepest at 425 feet. Each of the shafts ran directly beneath, the Michigamme River, with the top level only thirty-five feet below the riverbed.

The top 5 shafts had been nearly mined out, which left only the wooden shoring and some pillars of ore to bear the tremendous weight of the earth above.

It is generally believed that the disaster occurred when the fifth level of the mine caved in, allowing the levels above, and consequently the river, to crash down on the miners.

The night boss on the sixth level heard the crash. He knew immediately what had happened, and told his men to follow him to the ladder. The down draft caused by the crash blew out their lanterns and candles, and they had to grope their way in total darkness to the shaft. All but four of them reached the ladder and started to climb.

At the fourth level, they were met by a torrent of water from the Michigamme River, pouring down the shaft. From there, they could hardly breathe, except at the landings at each level, and reached safety at the top more dead than alive . . but alive.

The miners on the fourth level weren't so lucky. The night boss on the fourth level, was standing with another man when he heard the crash. Instead of heading for the lift, which would have carried him to safety, he went back into the shaft to gather his men, and was never seen again. Only the operator of the lift lived to tell the tale of his heroism.

Altogether, twenty-seven miners lost their lives. The death of so many husbands and fathers, as well as single men, was a terrible blow to the town, and it never recovered. By diverting the river into another channel, the mine was later redeemed and was operated until 1911 by the Oliver Mining Company. But, by 1913, the mine was closed and Mansfield's post office was discontinued. That was the end of Mansfield, except as a ghost town.

Now all that marks the site are a bridge across the river, a few houses, and a gray granite monument that bears the names of twenty-seven miners who lost their lives in the Mansfield mine disaster.

Today, the sign as you enter the ghost town reads; MANSFIELD MICHIGAN, POPULATION 3, but the 3 is crossed out and it now reads "2." One can only hope that this wasn't another tragedy.

In 1987, some of the area groups got together to restore the old log church and, take it from me, it is just beautiful-- not because it is ornate or fancy, but because it is simple and so very original for a pioneer church.

The door is unlocked, so go reverently in and look around. While you are there, be sure to sign the guest book.

Just like almost everywhere in the western U.P., the beauty is breath taking! I cannot help but thank God for his amazing handiwork. You know, if a cursed earth can be so beautiful, can you imagine heaven's splendor? Wow! 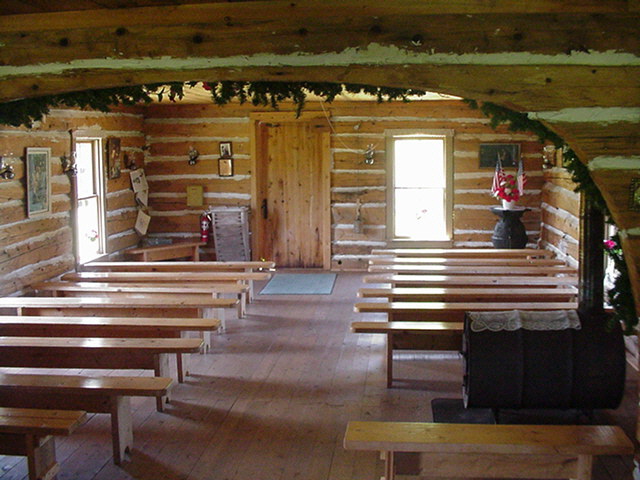